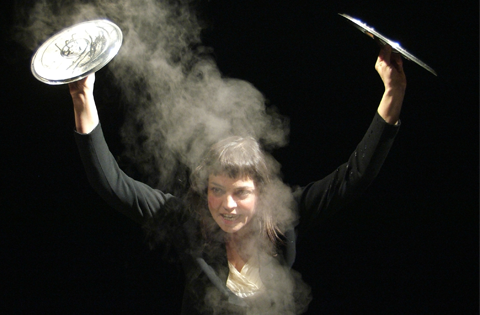 Since its very founding in 1989 Theatre Laboratory “Sfumato” announced itself as territory for theatre research. The artistic work over long-term programs (“Myths”, “Chekhov”, “Radichkov”, “Exit”…) gives the possibility for a deeper penetration into the poetics of a certain author or theme. TL “Sfumato”’s new program is dedicated to a key figure of the modern drama – August Strindberg. Its general title is “To Damascus” – after the title of probably Strindberg’s most unpopular and complicated play, which presents life as a journey of the soul by stages in its search for the truth of humankind. Borrowed from the Scripture, this title creates the allusion for the proverb of Saint Paul spiritual transfiguration, while via the character of the “Stranger” the author describes his own life’s way towards self-knowledge.

The beginning of “To Damascus” program is given by the adaptation of “Miss Julie” (followed by “The Dance of Death” and the workshop “Strindberg in Damascus” – all three productions in the program of ITF “Varna Summer”). M. Mladenova turns the emblematic for Strindberg naturalistic tragedy into a contemporary hyper-naturalistic drama. The director’s interpretation is focused on the collision between three worlds – three different strong characters, three different views of life in a dangerous game of superiority and submission.

“I am preoccupied with the alarming thought, with which the philosophers of the first half of the 20th century were living – what happened with man – especially after the wars – when he ceased to be the real object of civilization… We live already in the times, when the rules of the game are in the civilized barbarian’s hands, the world belongs to him and everything else are marginal niches, who care about other values… It seems to me that through Strindberg’s way we can put the diagnosis of what is happening to us now, and of what has happened to man after all… Because we have to be aware of that and to work for theatre as an institution for the expression of being, for the unique expression of unique matters.”
Margarita Mladenova