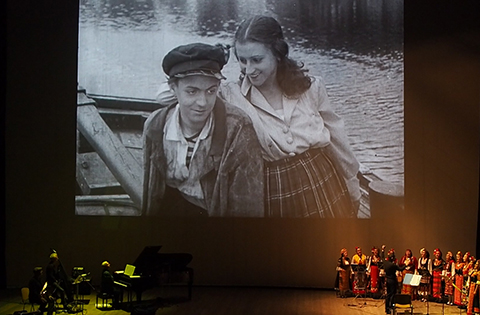 With the participation of the Great Voices of Bulgaria choir

“La Belle Nivernaise” is an unexpected combination of a silent film by the great director in the history of European cinema Jean Epstein, the Great Voices of Bulgaria choir conducted by Iliya Mihaylov and the Trio of the French jazz pianist François Raulin. Presented to great success in Italy, France and Bulgaria it earned rave reviews describing it as “an event of European scale, a real symbiosis of impressionist cinema and Eastern Balkan music.”

This cinema concert is devised as a series of musical pictures developing against the background of the images from the film by commenting or supplementing them. The magic power of Bulgarian voices is a unique match to the original compositions of the trio of jazz musicians. Thus, an intriguing dialogue between the European jazz and its improvisational element and the timeless music of folk songs is attained.

Diverse music sensibility creates a new and rare sound and while acting as a support to the film’s plot it becomes an unexpected co-author of the cinema narrative.

Iliya Mihaylov has been director of the Great Voices of Bulgaria choir since 1999. The conductor, who is a graduate of the prestigious Juilliard School in New York, the Associated Board of the Royal Schools of Music in London and the Lausanne Conservatory, has led the choir to global recognition. In 2010, МEZZO the European Music TV dedicated it a one-hour film that caused a great deal of interest. Along with participations in the most prestigious music festivals all over the world the Great Voices of Bulgaria choir is again in Varna to present this original film concert together with the François Raulin’s French jazz trio.

The Intermezzo Programme is a joint initiative with Varna Summer International Music Festival .