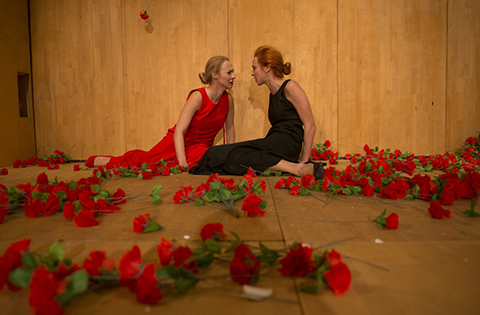 After the mysterious premature death of her son, the celebrated pianist Liv Stein falls into deep despondency and gives all up – her music, her career, her marriage, even herself. But the unexpected visit of the promising and mysterious piano student Lore claiming to have been close to her son forces her to face past demons. A pact is made that seems to reawaken Liv’s will to live…

“Liv Stein” is a psychological drama about art, obsessions, illusions and quests for truth for oneself. Author Nino Haratischwili belongs to the new generation of German playwrights. Born in Tbilisi, Georgia, she graduated as theatre director in Hamburg where she now lives and works. Since the age of 12 she has been writing in both Georgian and German; today she has authored more than 12 plays, most of which staged by herself. In 2008, her play “Liv Stein” won the big prize at the New Dramaturgy Festival in Heidelberg.

Director Kris Sharkov sees the play as an image of contemporary man who contemplates the ruins of his personal life and seeks to satisfy a primary and insatiable lack in art.  Kris Sharkov belongs to the new generation of Bulgarian directors and has displayed his consistent interest in German drama ever since his ambitious début with Heiner Müller’s “Macbeth” (2009), followed by staging of plays by contemporary German authors David Gieselmann (“Herr Kolpert”, 2010) and Roland Schimmelpfennig (“Besuch bei dem Vater” 2011). His performance of Ibsen’s “A Doll’s House” was nominated for IKAR 2012 Award for best début. Kris Sharkov has also staged an adaptation of Godard’s legendary film “Contempt” (IKAR Award nomination for best director) and Ibsen’s “An Enemy of the People”. His skilful selection of actors in “Liv Stein” makes for a powerful and captivating performance.

Union of Bulgarian Actors’ 2016 IKAR awards for best performance and for best actress in a leading role (Anastasia Lyutova).