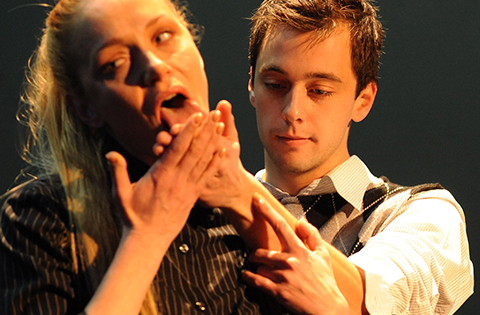 Love and Money is a contemporary British black comedy by Dennis Kelly, one of the highly-recognized representatives of new British drama, nominated for the prestigious Laurence Olivier Award. A husband tells about his wife’s suicide/murder while some scenes from their marriage rewind cinematographically back to the happy excitement in the moment he proposed to her. In an almost documentary style the performance goes on as an investigation into a perplexed situation where the fatal question turns out to be “what is stronger in human relations: love for the other or love for money”. Ikar 2012 Award for best actress in a supporting role (Iskra Donova).

The performance is carried out within the framework of the U.S./Bulgarian Stage Directors Exchange programme of The Drama League, New York and Art Office, Sofia. The rights for Love and Money’s premiere on Bulgarian stage were obtained in partnership with the British Council Bulgaria. The performance is carried out with the financial support of America for Bulgaria Foundation and the US Embassy to Bulgaria.