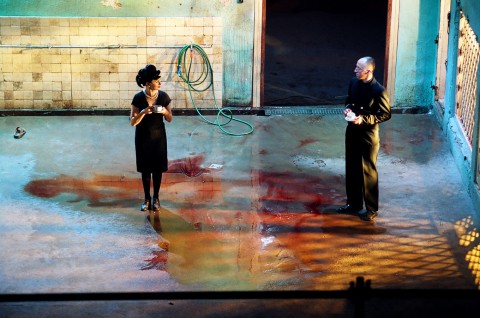 The Shakespeare’s play, directed by Grzegorz Jarzyna, is set on an American military base in present-day Iraq. Macbeth commands a daring military operation during daily Muslim prayers that ends with him terminating the local rebel leaders. The act, while praised by General Duncan, is just the first in a series of brutal murders that the ambitious military man will commit, incited by his ruthless wife and his evergrowing aspirations.

The televised version of the play was produced just a month before the demolition of the Warsaw Waryński Factory complex, which had served as the stage for 2007: Macbeth ever since the play’s premiere. Dynamic close-ups, editing, and additional sound effects improved and focused the intimacy and dynamics of multiple shots, while the pervasively claustrophobic interiors where the increasingly psychotic Macbeth spends his days strongly emphasized the liminal psychological condition of the protagonist.

Grzegorz Jarzyna (b. 1968 ) is a theatre, opera and film director, and since 1998 he has been deputy artistic director of TR Warszawa. Under his supervision, TR Warszawa has become a place of artistic experiments and creative development of many artists present today on Polish and international theater stages and movies screens. He graduated from the Faculty of Philosophy at the Jagiellonian University and Directing at the State Drama School in Krakow. His Tropical Craze after  Stanisław Ignacy Witkiewicz at the Rozmaitości Theater in Warsaw, was one of the most famous debuts in Polish theater. He staged, among others Iwona, Princess of Burgundy after Gombrowicz at the Stary Theater in Krakow (1997), 4.48 Psychosis by Sarah Kane (2002) at the Rozmaitości Theater in Warsaw as well as Dorota Masłowska’s Between Us Good (2009) – a co-production of TR Warszawa and Schaubühne am Lehniner Platz in Berlin. In his work he likes to combine genres and different art forms. He has received many awards and distinctions, incl. the award of the Minister of Foreign Affairs for outstanding services for Poland in the world (2002). In 2007, for Medea, staged at the Viennese Burgtheater (2006), Jarzyna was given one of the most prestigious theater awards in the German-speaking area – Nestroy-Preis.  In 2011, he received a silver medal for Merit to Culture – Gloria Artis, and in 2012 – the Culture.pl Superbrands 2012 Award for active promotion of Polish culture abroad.

In Polish with English subtitles.