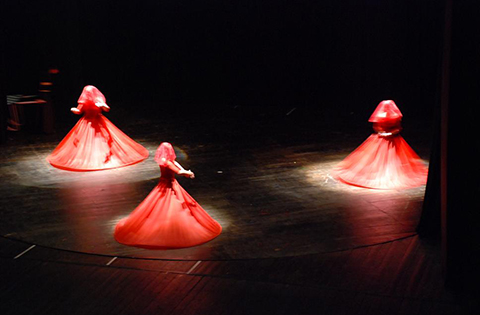 Diana Dobreva graduates as an actress from the Theatre college “Liuben Grois”. She takes part in performances and workshops by Theatre Laboratory Sfumato.  Her roles in the movies Monkeys In Winter and The Keeper of the Dead bring her the Golden Rose award.

Her debut as director is with the chamber performance MEDEA based on her collage of texts on the myth of Medea. The show attracts critical and public attention with its expressive visual side and Diana Dobreva is nominated for the Union of Bulgarian Actors IKAR 2007 Award for debut, and wins the Askeer Award for emerging star.

Her second work as theatre director Diana Dobreva makes for the  stage of the Rhodopean Theatre, where she chooses to stage Shakespeare’s bloody tragedy of power “Macbeth”. In the play she implements excerpts from works by the Bulgarian expressionist poet Geo Milev, whose style is noted for its aggressive imagery and fatalistic feeling for the course of history. The performance examines the powers of domination, the struggle between good and evil in man. The fragmentary scenario is invested with expressive theatrical vision. After long absence from the theatre stage, the popular film actor Liuben Chatalov plays the part of Macbeth.

This performance is a part of man’s never-ending endeavor, both as artist and as sufferer, to meditate on the insolvable jigsaw. Why do we still crave power even though we know that the path to it is surrounded by hatred, envy and evil!
Diana Dobreva