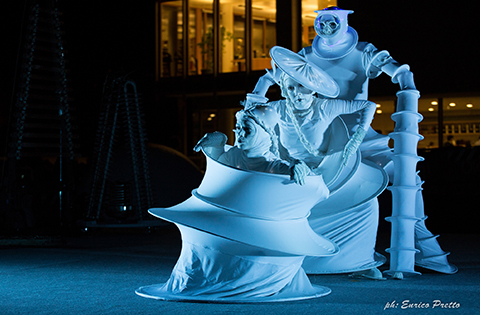 “Moonlight Invasions” proposes the idea of a “different/another” space, with a sense of gravity unlike that on Earth, a sense of a very remote world, populated by imaginary beings venturing in unexplored places. This is a street performance evoking a universe of surreal imagines using body, costumes, tools and a play of lights and shadows. “Moonlight Invasions” is an invite to flee from the real world and plunge into the magic of mystery.

During itinerant parade stilt acrobats and dance actors glide amongst the crowd, creating illuminated tableau vivant. The mastery of the actors becomes a game, which interacts with adults and children, while dance becomes a magic ritual.

Parolabianca is the artistic name of Francesca Krnjak – fantasist, performer, storyteller, street artist, musician, singer. In one word, she is a versatile artist that has its roots in a long search passing through dance, theater and music. She lives and works between Modena (Italy), Capetown ( South Africa) and Berlin (Germany). With the street performances of her company she has travelled all around the world presenting them at major performing arts festivals.

The presentation of the performance is supported by the Italian Cultural Institute – Sofia.