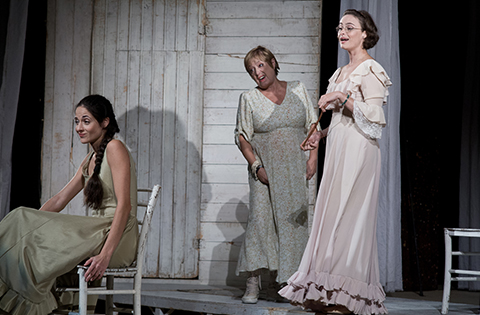 “Much Ado About Nothing” is one of the most successful and performed productions of the “Bulgarian Army” Theatre for the last 20 years. The premiere took place in 2007 under the direction of Krasimir Spasov, winner of the IKAR Award for lifetime achievement. So far the production has been seen by more than 250 000 viewers and several generations of actors have taken parts in it. In “Much Ado About Nothing” actors such as Ivan Radoev, Stefania Koleva, Kamen Donev, Georgi Karkelanov, Anastasiya Ingilizova made their first star appearances.  This production marked also the rise of the actor Stefan Valdobrev in the role of a composer – it is for this show that he wrote his hit single “Heaven”, which had a life of its own on the Bulgarian pop charts.

Last but not least the success of the show is due to the intriguing plot of the Shakespeare play: i the spectator is transported in Messina of the 16 century and tells the story of a few young people, consumed by love and desires, who get into a lot of adventures and find their happiness in the end.

With the presentation of “Much Ado About Nothing” in the year celebrating 400 years since the death of Shakespeare, the festival would like to celebrate also the 75 year jubilee of the director Krasimir Spasov.