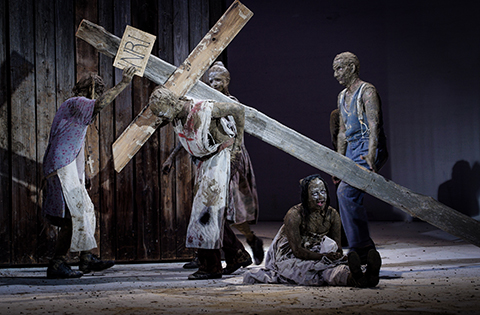 Lessing’s Enlightenment drama from the year 1779, which is set in the period of the Crusades, is a plea for religious tolerance. As in Lessing’s time, the cultural dialogue that it demands between Christianity, Islam and Judaism, based on rationality and humanity, reads like a fairy tale in these times of intensifying fundamental conflicts––a fairy tale that follows the structural principle of a comedy. This is shown by the series of coincidences, complex family relationships and happy resolutions to conflicts. Humour is presented as a possibility with which to counter the barbarism that threatens to overshadow everything. Director Andreas Kriegenburg interprets the story as an archaic comic, at whose beginning is Man, created from earth.

Nathan, a Jew, returns from a business trip to his home in Muslim-occupied Jerusalem. His house has been burnt to the ground, and his daughter Recha rescued from the fire by a pardoned Knight Templar. Nathan’s friend Al Hafi has been ‘promoted’ to treasurer to the Sultan, who in turn desperately needs money from Nathan to finance his war against the attacking Crusaders. The Knight Templar resists his burgeoning love for Recha. Daja, a Christian companion, lets slip to the Templar that Recha is in fact a Christian orphan. Her adoption by Nathan could lead under current law to his being burned at the stake.

Andreas Kriegenburg has been called “a master of visuality in theatre” for the strong and original visual emphasis of his stagings. Originally from the former German Democratic Republic, Andreas Kriegenburg, after studying carpentry, decided to join the theatre of his native city, Magdeburg, believing that it was a place of possible freedom for him. He was a technician there, before becoming, at 21, assistant to the director in 1984 in Zittau then in Frankfurt an der Oder. It was there that he staged his first play in 1988. After the fall of the wall, he went to Berlin and the Volksbühne from 1991 to 1996. His path led him to the Schauspiel in Hanover then to the illustrious Burgtheater of Vienna, which he left in 2001 to become the principal director of the Thalia Theater of Hamburg. With the 2009/2010 theatre season, Kriegenburg joined the Deutsches Theater Berlin as an in-house director. During all these years, he crossed Greek tragedy, the theatre of Shakespeare and Chekhov, as well as the contemporary German and European theatre. His work expresses an aesthetic search of great quality, but also his curiosity for texts from other forms that he adapts for the theatre. Altogether, nine of Andreas Kriegenburg’s productions have received invitations to Berlin’s Theatertreffen festival and he has been distinguished with the leading awards in German-speaking theatre.