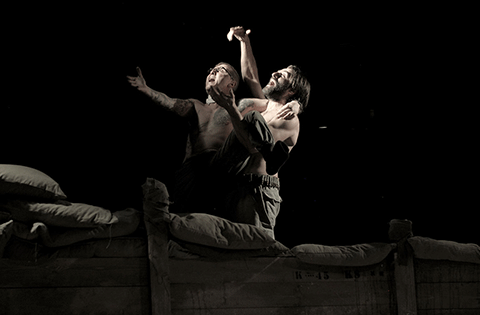 After the film script of Danis Tanovic

The performance is the first theatrical version on Bulgarian stage of the renowned film of the same name of the Bosnian director and screenwriter Danis Tanovic who won an Academy Award, Golden Globe, Best Script at Cannes Festival and other awards in 2001.

During the war in former Yugoslavia in early 1990s three soldiers are caught in a trench in the “no man’s land” between the enemy lines. One of them is lying on a land mine. They confront each other as enemies, but it turns out that they are very close, sharing memories, stories and friendships. The differences between them seem less and less substantial and the conflict seems more and more ridiculous. A realistic and captivating account of war that echoes the question of when human relations fall victim to social conflicts and whether this can be overcome.