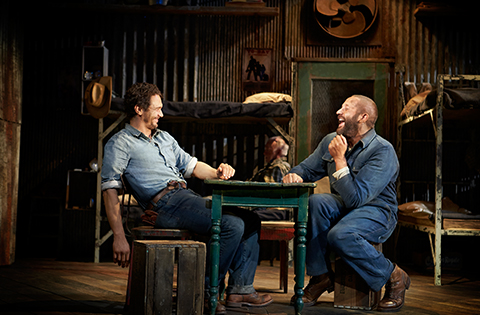 OF MICE AND MEN

Globe winner and Academy Award nominee James Franco (127 Hours, Milk) and Tony Award nominee Chris O’Dowd star in this dramatization of the famous novella by Nobel laureate John Steinbeck. It gains attention right after its appearance in 1937 and tells the story of the difficulties and the friendship of two migrant workers during the Great Depression in California. James Franco plays big-dreaming George who fatherly protects the mentally disturbed but physically strong Lennie (Chris O’Dowd), who doesn’t know his own strength. Anna Shapiro stages a remarkable interpretation of Steinbeck’s stage adaptation achieving a powerful portrait of the American spirit and a heartbreaking testament to the bonds of friendship. The production of the legendary “Longacre Theatre” is filmed on stage by National Theatre Live and becomes part of its programme for satellite broadcast to cinemas around the globe.
Tony Award Nomination for best performance and for best actor (Chris O’Dowd)
The production is presented in the frame of National Theatre Live from London project for satellite broadcasting of the best from the British scene to cinemas around the world. It is realized in Bulgaria by the British Council and supported by Homo Ludens Foundation, Sofia Municipality and Cinema City.