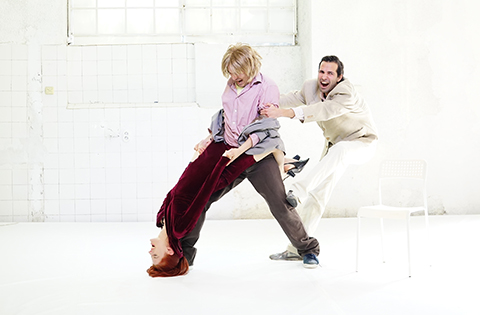 music by Chopin, Stefan Hristov and others is used in the performance

Ivo Dimchev is a choreographer and performer of world renown whose work gained attention due to the extreme and vivid combination of performance art, theatre, music and visual arts. “I am interested in the physical power of music and in the melody of my muscles,” he says about his special interest in music. His voice and the way his body “sings” are unique – as if by playing with different reincarnations the performer himself is transformed into music. “Operville” is Ivo Dimchev’s most recent performance, in which he experiments with his own idea of opera, together with the young singers Plamena Girginova and Nikolay Voynov and the musician Stefan Hristov, also known as Mr. Smiff among club-goers. A monologue is running on a screen, extreme like a confession and playing with the audience’s perceptions of what is going on the stage. Like in surrealistic visions the three performers go through different moods, images and states. Expect vocal improvisations based on classical and contemporary music in the most unexpected way.The performance premiered at Kaaitheater’s prestigious festival Performatik in Brussels.