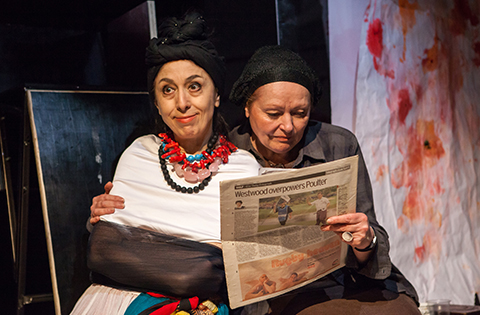 A common woman loses her hands in a work accident. While trying to overcome the trauma she starts painting and the media instantly make a sensation out of her story. Her clumsy works sell like hot cakes while her “well-wishers” are trying to milk her. One day, a miracle happens as if turns back time. May one really bring back what one has already lost? And at what price? In addition to making a name for herself as one of the most successful Bulgarian literary authors, Elena Alexieva is increasingly asserting herself on the stage as her texts have already won the main awards for best play.
“The strongest quality and the truest discovery of Elena Alexieva’s play “Phantom Pain” having influenced the work of both director and actors is the original presentation of an almost documentary drama taken from the crime news reports… told as a story about the banal everyday cruelty that surrounds us and, for a second time, as a story about the inexplicability of life, about life as the everyday miracle that happens to us and that we realize only in extreme situations.”
Kameliya Nikolova, Literaturen Vestnik
By this performance ITF “Varna Summer” joins the celebrations marking Theatre 199’s 50th anniversary.