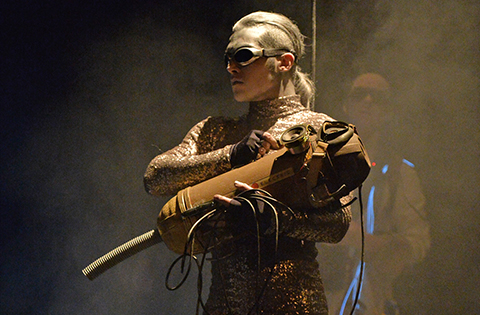 A theatrical/visual/psychic/scientific investigation of origin, meaning, significance, and human longing in a post-everything society where the boundaries between human and machine have been erased. This immersive performance draws the audience into a magical world filled with six mysterious characters, composed of new technologies and ancient objects. The audience is free to wander from character to character, or a person may choose to sit with one character and allow their cacophony to wash over them. “Post-everything” is a performance/installation by Bulgaria set designer and visual artist Venelin Shurelov realized together with Bulgarian costume designer Elica Georgieva and master students in Theatre Arts at Towson University in Baltimore, USA.

Venelin Shurelov is set designer and visual artists from Bulgaria. He is co-founder and lecturer in MA program “Digital Arts” at National Academy of Arts, Sofia and part of curatorial team of DA FEST – International Festival for Digital Art, Sofia. He is also founder of the international art collective “Subhuman Theatre” (2004). His own artistic works relate on decoding the language of modern myths and encoding them in new creatures, on intersection between man and technology, human and subhuman as a sub-product of the social, political, economical and cultural situation. Theatre and performance play a major role in his creative repertoire, which includes drawings, interactive installations, digital technologies, videos and art theory. His works have been presented in various contexts, exhibitions and festivals in Bulgaria and abroad and have been distinguished with the IKAR Award for best set design, with M-tel Award for Contemporary Bulgarian Art and many others.