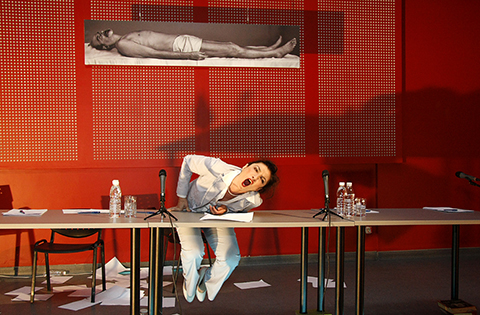 Project sequence – GIVE ME THE GOOD LIFE Nr. 6 FUCK YOU Eu.ro.Pa!

The independent theatre TART Produktion is founded in 1999 by Bernhard M. Eusterschulte and Johanna Niedermüller. It is active in the field of drama and music theatre and performance. Since 2007
TART Produktion develops the series “Hier mit dem schoenen Leben” (Give Here Good Life!) which encompasses till now 5 theatre projects. The six sequence is the staging FUCK YOU, Eu.ro.Pa! written by Nicoleta Esinencu presented by Centre for Culture and Debate “Red House” – Sofia, Theater Rampe – Stuttgart, TNL – Luxemburg
Nicoleta Esinescu is a Moldavian author who writes in Romanian. She lives and works in Kishinev where she graduated Theatre Studies from the University of the Arts, writes plays in Rumanian and in the timeframe of 2002- 2005 works for one of the leading theatres “Eugène Ionesco”. In 2003 she received scholarship for the Schloss Solitude Academy in Stuttgart, Germany, where she completed FUCK YOU, Eu.ro.Pa! and Zucker frei. FUCK YOU, Eu.ro.Pa! has been presented in Kishinev, Galatz, Brashov, Cluij, New York, Moscow, Nancy, Kanasawa (Japand) and Zilina (Slovakia) and in 2004 it was awarded with the Rumanian theatre award dramAcum. It was published in the compendium of the Rumanian pavilion at the 51. Venice Bienalle in 2005 which provoked a political arguments in Republic of Moldova and Rumania.
The play explicates in a monologue of “a young woman” her collision with the post socialist reality, the loss of sense for socialization and identity from the socialist times and her childish hopes for better life in Europe. It is performed by one of the most distinguishing and non-conventional Bulgarian actresses – Snezhina Petrova, herself in the middle of the thirties and having lived in both political systems.
“Is HEAD & SHOULDERS a better shampoo? Next time I’ll bring you an American soap. AVON. My uncle brought it from the States.” An excerpt from „„FUCK YOU, Eu.ro.Pa!”