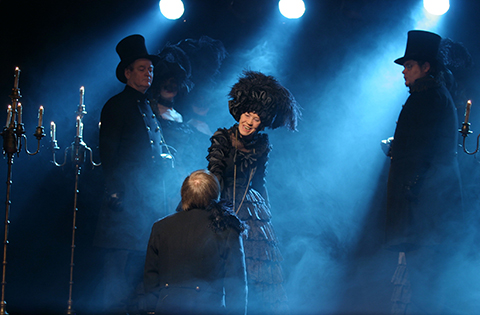 The Theatre Red Torch in Novosibirsk is one of the leading theatres in Siberia. Its repertoire is focused on world classical dramaturgy, staged by established and young theatre directors. During the last years its productions have received several nominations for the national theatre award The Golden Mask. Queen of Spades brings the young director Timofey Kuljabin the award for debut at the Theatre Festival Competition of the Union of Theatre Makers in Novosibirsk. How is it possible to stage such a performance at this age?, a theatre critic writes. Kuljabin’s performance on Pushkin’s theatre poem is staged at the level of wise academism. Young director Timofey Kuljabin turns to Pushkin’s “Queen of Spades” to illustrate how people can transform into “cards”
in the trickeries of fate and chance. In this performance all the elements work in integrity, writes Ruskaya Gazeta. The performance carries us to the realm of beauty and aesthetics, says theatre critic Alexander Kolesnikov.

Besides for debut, Queen of Spades has received awards for: Directing and best actor in a leading role (Lavrentiy Sorokin) at the First Festival of Theatres in Russia Volga Theatrical Seasons 2007 (Samara); for set design and best actress in a supporting role (Anna Pokidchenko) at the XX Theatre Festival Competition of the Union of Theatre Makers in Novosibirsk and other. The presentation of the performance at ITF Varna Summer is part of the Year of Russian Culture in Bulgaria Program organized by the Ministry of Culture.

This is a performance about the existence of a certain moral limit beyond which the inexplicable and reality merge into insanity. About the fact that nowadays the borderline between right and wrong has been obliterated. That is why for me the moral position in Pushkin’s piece is very important.
Timofey Kuljabin