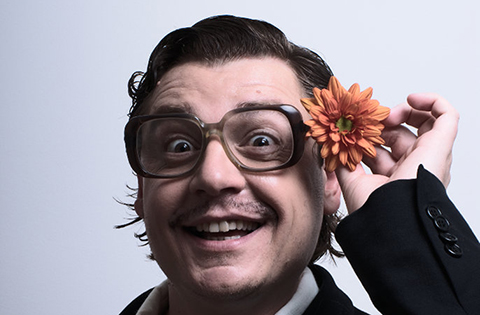 REFLECTIONS OF A TEACHER ON FOLK ART

Apart from his very active and successful career as an actor, Kamen Donev is the author of round 30 plays as well, some of which he has staged himself. He is a winner of several awards, among which: IKAR 2000 of the Union of Bulgarian Actors for best dramaturgy (for his comedy Runaway Plane); Award of Radio FM Classic and the Ministry of Culture
for contributions to Bulgarian culture, IKAR 2006 for best actor in a leading role and many others. Reflections Of A Teacher On Folk Art is his first one-man show. Main figure in the show is the Teacher – a comical and absurd character, invented and played by the actor for a sketch in the TV show by Stefan Moskov The Street, which brings him huge popularity. With his characteristic sense of humor Kamen Donev connects in ascending line short comical sketches and droll improvisations in a wide range from the parody
to the purely nonsensical, and plays with various national and behavioral stereotypes. More than 2 hours he dances, sings, talks in edifying manner and teaches the Bulgarian folklore dance horo in several languages with the accompaniment of music by Bulgaria’s best musicians, as a form of therapy.

The subject we shall be dwelling on today, is to rediscover folk art and its wide applications in life – for the improvement of our health, working efficiency, communication skills and in our respite from toil. Folklore songs and dances can help us cope with life’s misfortunes, stress, loneliness, boredom, problems with the locomotory system, fatigue, negative emotions…
Kamen Donev