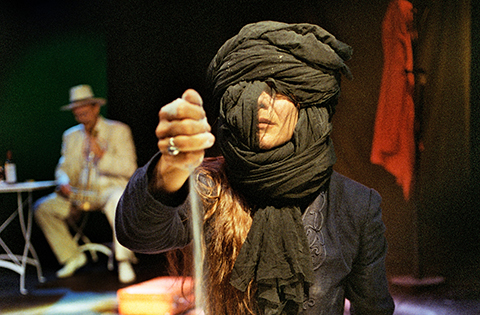 Eugenio Barba is one of the most significant figures in the theatre of XX century. He continues to stage with the troupe of the founded by him Odin Teatret in Holstebro. His researches on the art of the actor are going on at the International School for Theatre Anthropology. Eugenio Barba is Doctor Honorois Cousa of numerous universities all over the world and has received some of the most prestigious awards like the Award of the Danish Academy, the Award of Mexican theatre critics, Diego Fabrizi Award, the International Pirandello Award, the Sonning Award of the University of Copenhagen.
A female odyssey. A woman travels from one Mediterranean island to another in search of a loved one who has disappeared. A phantom accompanies her in a dance which brings her closer to an awareness of a definitive absence.
“Salt” is a journey through the vast country. At first it confronts with the confusion between the feelings of the present and those of the past. Till the moment “when memory no longer belongs to what we were; it is no longer a sentiment, but flash and blood. It is an integral part of what we are and will be”, Barba writes. The actress Roberta Carreri gives Antonio Tabucchi’s letters voice and gesture accompanied by Jan Ferslav’s playing the nineteenth century mandolin.
“We also travel inside our memories. Some of them become vast vertical landscapes. At times we sink into them.”
Eugenio Barba
Odin Teatret thanks Thomas Bredsdorff, Knud Erik Knudsen, Raphaëlle Doyon, Kaj Kok and Nathan Meister.
Co-production: Fondazione Pontedera Teatro and Nordisk Teaterlaboratorium, September 2002