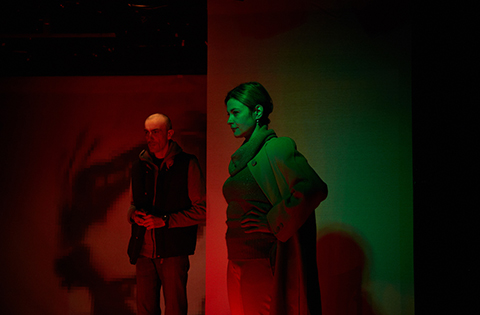 Scenes from a life

“Saraband” is an ancient Spanish dance in the typical slow time that has been used by composers of different times. The saraband is the underlying motive for the last story in the work of Ingmar Bergman, who was recognized as a “classic” playwright, screenwriter, film and stage director in his lifetime. It was initially written for a television film that appeared in 2004 as a part of the series “Scenes from a Marriage”.

Ivan Urumov’s perfromacne is the first time Bulgarian spectators meet “Saraband”. It opens with Marianne’s inexplicable, at first sight, appearance at Johan’s home. Johan is an intellectual in the end of his life, full of love affairs, who has withdrawn to live in isolation and seclusion. The two are former spouses with lots of things half-expressed and complex relationships behind. The other characters in the play are Henrik, Johan’s stepson, and his daughter Karin, a young and talented cellist. The performance runs as meetings of the four, always in pairs and never all together. They reveal the complexity of human personality that is inevitably built-up, changed, distorted in its relations with others. They all are at that point of their lives when it is time to strike a balance. How does the future look like in the tangle of the complex past? It is precisely young Karin’s fate that is in the centre of this saraband.

Ivan Urumov stages the play as if using a baton – with smooth and precise restraint – and thus builds up a captivating theatre suite. He reads Bergman’s text without looking for unnecessary effects and reveals of its nuances aided by actors’ sensitive performances.