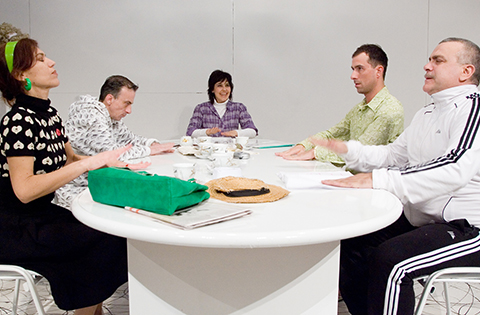 With her last year’s debut play “Small play for a children’s room” Yana Borissova (ITF “Varna Sommer” 2008) announced herself as a talented and original playwright. “Small play …” received all awards for theatre plays in Bulgaria and was translated into French and presented with a stage reading at the Avignon Festival. In her second play “Silent Invisible People” Yana Borissova’s approach to build up the situations like a play of the characters’, a play that challenges their capacity to understand each other and to inscribe themselves into reality, is further developed to its extremes. It is about several people – “some of the best in advertising” who are brought together in a room by an anonymous guarantee with the task of coming up with an effective ad for a new brand of bubble gums with a very strange name. Everything moves in a collegial and energetic work spirit, until the moment when they all discover that the door is mysteriously locked from outside and they shall have to spend much more time together than expected… One of the most original Bulgarian theatre directors Dessislava Shpatova creates her performances as a polyphonic space. She chooses as driving force of the performance “Silent Invisible People” the energy of the process of the characters’ communication and their witty, non-sense verbal flow. The result is a stylish and idiosyncratic show, which tests the limits of the imaginary and the enjoyment of life as play and play as way of life.
“Silent invisible people” is an absurdist comedy dedicated to the impossible art of intercourse… However, amidst this impossibility there is a space that is much more interesting than the visible one and where the lack of understanding of each other turns into matter with which the characters start to create a magical reality.”
Yana Borissova