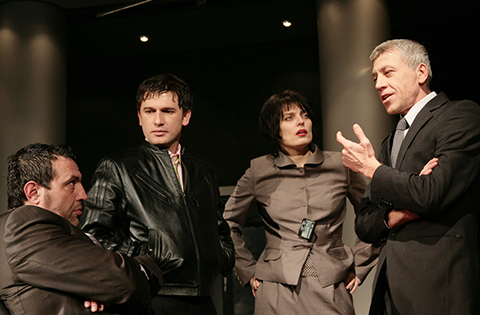 The original title of the play by the contemporary Catalonian playwright Jordi Galceran is „El Metodo Gronholm”. His unusual, full of intensity and comic effects plays (Dakota, Chain of Words) explore the dark sides of human relationships. They elaborate an original and intensive dialogue, moving on the borders between various cinematographic genres. El Metodo Gronholm is written within the frames of the T-6 Program, in which each year 6 authors are commissioned to write a play for the new season of National Theatre of Catalonia. The plot is instigated by a newspaper scandal after a journalist published dossiers of applicants for a job in a supermarket found by her in a junk-heap. They were all scratched with insulting definitions. The journalist’s investigation Galceran takes for the basis of his abrupt theatrical office-thriller.

The plot revolves around four candidates for the position of executive director in a multinational company. The interview for the candidates soon turns into a twisted psychological game where truth and fiction merge while a corrosive power struggle takes place until the surprising ending. The realityshow-like play reaches an unprecedented for the new Iberian drama success on the national and international stages. One of the most intriguing Argentinean directors Marcelo Pineyro films it in The Method (2005).