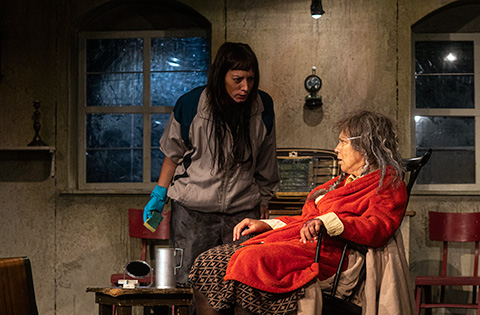 THE BEAUTY QUEEN OF LEENANE

In a small house in the mountainous Irish town of Leenane, 40-year-old Maureen lives with her obsessive and manipulative mother, Mag, who needs daily care. In the whirlwind of painful relationships, marked by battles for supremacy, eternal discontent and constant rain, Maureen dreams of leaving home forever. When she meets the unexpected suitor Pato Dooley, she dares to dream of a better life. However, her mother Mag has much different plans

“The Beauty Queen of Leenane” is the first play by British Irish playwright Martin McDonagh. It was published in 1996 and was an immediate success, and the author became one of the most interesting contemporary playwrights, screenwriters and directors (“In Bruges”, “Three Billboards Outside Ebbing”). McDonagh likes to play with stereotypes in dramatic genres such as thriller and melodrama and ironically overturns them. The main motive in his work is violence in human relationships. The director Vladimir Lyutskanov stages “The Beauty Queen of Leenane” together with the talented and convincing cast as a show about the relations between people who are looking for light in the tunnel.