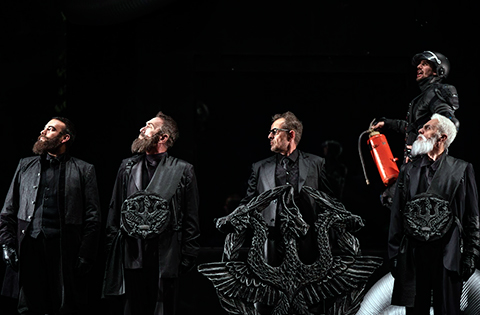 The topic of political power, its impact on the one who has it as well as on the society, is of abiding interest for director Javor Gardev. He returns to the stage of Varna Theatre with “The Dragon” by Evgeny Schwartz. In the form of a fairy tale the play tells about the logic of totalitarianism. Not surprisingly, the play, written in 1944, was banned by the then-ruling regime of Stalin. Javor Gardev stages it in an adapted version as a summarized “parable of the reincarnations of power.”

The Hero comes to a town aiming to liberate it from the all-embracing and oppressive power of the Dragon. But his efforts are paradoxically confronted by the resistance and inertia of its
citizens accustomed to their ruler. The Dragon turns out to be reincarnated in each and every one of them. What is the road to liberation from such a vicious circle and what Heroes do the societies
allow?

“The Dragon” is an impressive performance due to its imposing set and carefully crafted characters.