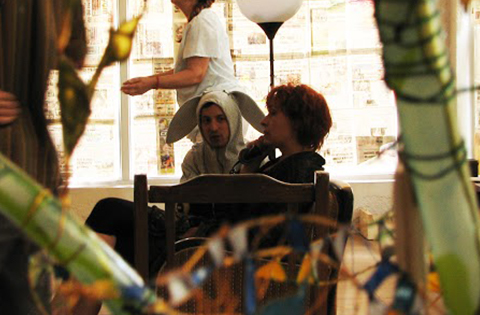 THE EFFECT OF GAMMA RAYS ON MAN-IN-THE-MOON MARIGOLDS

with subtitles in English

“The Effect of Gamma Rays on Man-In-The-Moon Marigolds” is the story of a mother, her two daughters, a dying woman and a rabbit – a weird family living in what seems to be isolation at the corner of the world in its home/store. The mother is obsessed with her desire to attain normal existence by way of some odd ideas of fast money making, the older sister is making painful efforts to fit in, the younger sister discovers her world in school experiments with the mysteries of science, while the rabbit keeps on hanging about. The talented creative team led by director Mariy Rosen provides the audience with an opportunity to experience, as directly as possible, the story of an unusual family, staging it as a “real environment theatre,” in a space immediately recreating the real-life conditions described in the play. The performance runs as an intriguing happening, as a show where the leitmotif is the problem of self-realization and broken dreams. Paul Zindel’s play is one of 20th-century American drama’s landmark works, it has received the Pulitzer Prize and is quite popular among the larger audience thanks to Paul Newman’s screen adaptation in the 1970s.
The performance is realized with the support of the Ministry of Culture. Thanks to O-o! Alternative Spaces for Contemporary Culture in the City, an initiative of Kalina Terzieva, set designer and artist, Yavlena Real Estate Agency and ACT Association for Independent Theatre.
Union of Bulgarian Actors’ 2015 IKAR Awards for best actress in a leading role (Ana Valchanova) and best director (Mariy Rosen)