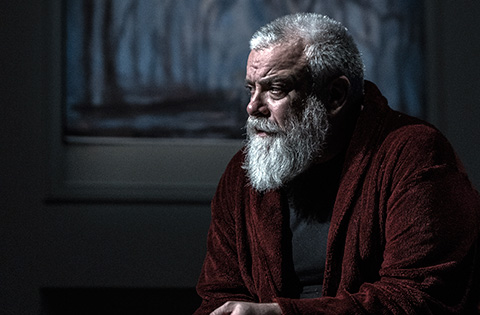 Florian Zeller has gained fame of  “the most exciting playwright of our time”. The Moliere Prize-winning play The Father (2014) is the second part of a trilogy on the modern family that begins with The Mother (2010) and ends with The Son (2018). In a poignant, humorous yet faithful way, Zeller brings to the stage issues of life that are still tentatively spoken about openly.

The Father penetrates the mind of 80-year-old André. He lives alone in his apartment in Paris and gradually notices that things start to disappear around him, he has the feeling that someone is following him, he loses his orientation. And now his older daughter Anna (Radina Kardzhilova) wants to leave to London… The play follows André’s search for himself at a moment in his life when his established biography and relationships no longer seem to be valid, and the world is gradually erasing itself. The staging continually upends expectations and almost feels like a thriller at one point.

Vladimir Penev’s bravura performance as André makes it one of the most important roles in his biography as an actor. Here we see director Diana Dobreva in a new light – away from her usual big scale productions and broad sweep, with attention to psychological details.