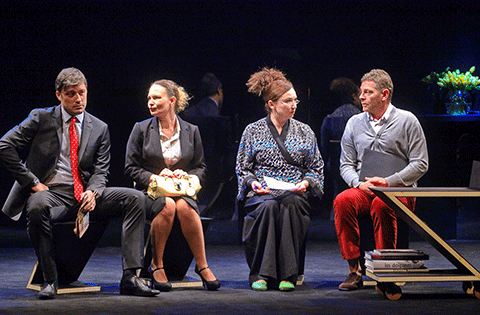 THE GOD OF CARNAGE

Two boys have had a fight and one of them is left with two broken teeth. This accident becomes the occasion for their parents to meet with the intention to decently and reasonably discuss the situation and its consequences for their sons. But the thin surface of their polite conversation soon starts to crack up and it gets more and more difficult to find out who is to be blamed for the aggression.

“The God of Carnage” is yet another play masterfully written by the French author Yasmina Reza that has won some prestigious awards. It is no chance that she has topped the lists of the most-performed contemporary playwrights in the world. Her plays skillfully combine the form of brilliant comedy with delicate irony and attentive portrayal of the paradoxes of contemporary social norms. Is it dangerous to keep silent about when “taboos produce demons”? The characters of this bitter comedy lose their hold of themselves similarly to the world of today that has gone out of control. A strong acting performance echoing important questions.