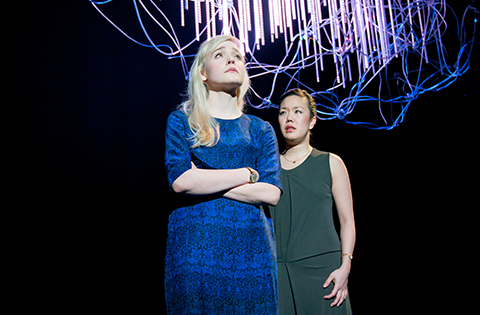 in English with Bulgarian subtitles.

Hilary, a young psychology researcher at a brain-science institute, is nursing a private sorrow and a troubling question at work, where psychology and biology meet. If there is nothing but matter, what is consciousness? This is the hard problem which puts Hilary at odds with her colleagues. Is the day coming when the computer and the fMRI scanner will answer all the questions psychology can ask? Meanwhile Hilary needs a miracle, and she is prepared to pray for one. The Hard Problem is the newest play by the world known playwright and screenwriter Tom Stoppard (Rosencrantz and Guildenstern are Dead, Shakespeare in Love a.o.). It is a contemporary story of the meeting between spirit and matter, psychology and biology. Flecked with Stoppards wry, ironic humor and luminous intelligence, directed with exemplary lucidity by Hytner, this is a play that, movingly, wrestles with deep questions about what makes us who we are Financial Times Newspaper.

The production is presented in frame of National Theater Live from London project for satellite broadcasting to cinemas around the world of the best from the British scene. It is realized in Bulgaria by British Council and supported by Homo Ludens Foundation, Sofia Municipality and Cinema City. This production is part of NT Live, the National Theatre’s groundbreaking project to broadcast the best of British theatre live from the London stage to cinemas across the UK and around the world. In Bulgaria NT Live is brought to you by the British Council in partnership with Cinema City and with the support of the Homo Ludens Foundation and Sofia Municipality.