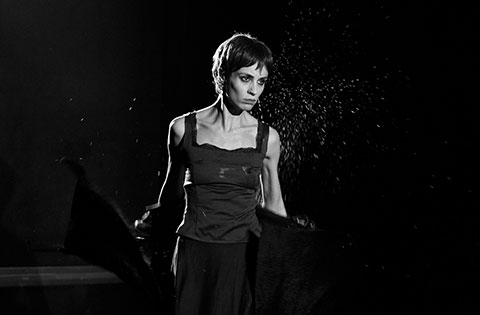 After the novel “Idiot” by F. Dostoevsky

Adapted and directed by Margarita Mladenova

In a letter F. M. Dostoyevsky shares that in his novel “Idiot” he aimed “to portray a perfectly beautiful human being”. Prince Myshkin is like the Holy Fool, a real Christian in a non-Christian world as he has been determined in the spirit of 19th-century literature. Margarita Mladenova’s adaptation of the voluminous novel is focused on the thread of his relations with Nastasya Filipovna. The gesture of compassion as the only way, rather an experience, to save the human, running the risk of becoming a laughing stock, of being declared an “idiot”, an outcast, and the hope that another will repeat that gesture, then, a third one, etc. despite “the failure” of the ones before, is director’s main interest.

“Idiot” is translated into the theatrical language typical of “Sfumato”, expressive and ecstatic, as if springing from the depths of human soul. As in “Demons”, this performance also features actors of the youngest generation.