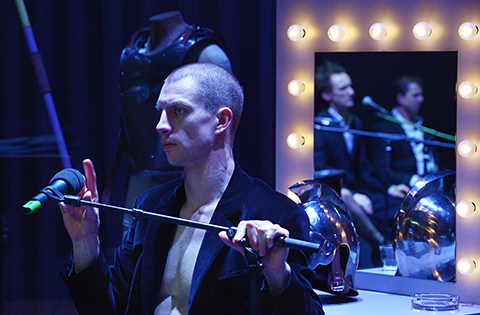 “The Iliad” of the Slovenian National Theatre is innovative and magnificent, as much classical as inspired by European theatre avant-garde, with subtle hints of the contemporary history. (Margareta Sörenson, Chair of International Association of Theatre Critics).
That is how critics describe this remarkable stage adaptation of the Homer’s epic that lies in the foundations of European culture and civilization. The performance begins as a concert in which the actors narrate “Iliad” in the affective original rhythm of Homer’s hexameter unraveling its three worlds: the Greeks, the Trojans and the Gods. In the second part, the performance pictures the great slaughterhouse that is the Trojan war: it becomes an image of all the battles in the world and all victims become an universal symbol of redemption. Here director Jernej Lorenci gets together some of the best actors in Slovenian theater.

POLITIKA AWARD FOR BEST DIRECTION AND THE AUDIENCE AWARD AT BITEF FESTIVAL 2015 IN BELGRADE.

Jernej Lorenci is familiar to the Bulgarian audiences with his productions of “Storm” by A. Ostrovsky and “The Crazy Locomotive” after S. Witkiewicz presented at World Theatre in Sofia and International Theatre Festival “Varna Summer”. He is among the leading theatre directors in Slovenia and senior lecturer at the Academy of Theatre, Radio, Film and Television in Ljubljana. He has received numerous awards: Best Direction Award at the biggest theatre festival in Slovenia “Borštnikovo srečanje” in Maribor (for “Epic of Gilgamesh”, 2005; “Oresteia”, 2009; “Storm”, 2012), three Grand Prix for Best Performance (“Cleansed”, 2001; “Storm”, 2012; “The Crazy Locomotive”, 2013) a.o.

See ‘The Iliad’ also at World Theatre in Sofia.