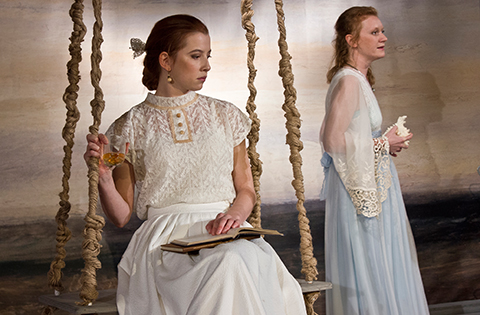 THE LADY FROM THE SEA

For years Ellida Wangel has existed as a shell thrown at the bottom of the dark sea. Her life has stopped at one moment in the past, which for her feels much more real than the present and much happier than the future. And on the fjord’s shore people enjoy the warm summer nights, fall in love, dream; in the north the sun rises even at night in the summer …

“The Lady from the Sea” is among the best known symbolist plays of Norwegian playwright Henrik Ibsen, the father of modern drama. The play has been made into an opera, a balad, it has several screen versions, one of them starring the great Bergman actress Liv Ulman. The play focuses on the fate of Ellida Wangel married to Doctor Wangel, a doctor in a small Norwegian town. After years of absence, her old flame, a sailor, reappears and she faces a hard choice to make.

Young director Vasilena Popilieva has considerably anridged the text and made an intimate performance with an experienced cast of actors of different generations. Its central topic is the pursuit of personal freedom: “…that freedom which comes not by leaving, not by chaging the outside aspects of life but only when one manages to be separated from the thing inside him which keeps them well-anchored in one place.”