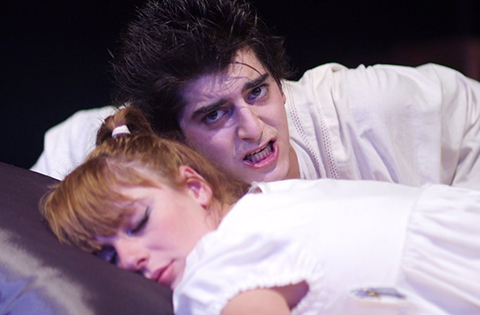 The actor and director Marius Kourkinsky dwells in his stagings in the dark zones of human emotions.
He brings them to extreme, almost demonic stages between farce and powerful drama. “The Magnificent Cuckold” by Fernand Crommelynck who is famous for his artistic skill of turning human weaknesses into frightening obsessions, deals in a farcical and at the same time lyrical manner with the extremes that jealousy can reach. Bruno is madly in love with his beautiful wife Stella.
To set himself free from the intrusive doubts of her cheating, he decides to test her loyalty by pushing her to infidelity.
The performance presents the youngest actors in the ensemble of Small City Theatre Off The Channel.