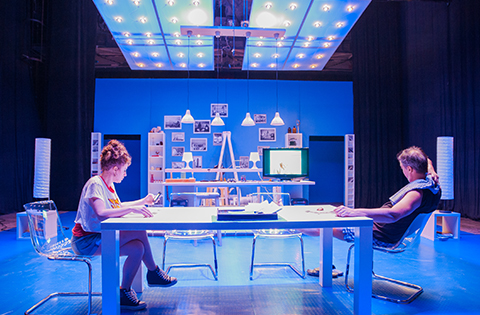 A family dinner at the policeman David’s place. His wife Lidia has invited her childhood friend Sandra and her husband. He had lost one eye at a protest rally and the perpetrator turns out to be none other than the host… Contemporary Spanish playwright Marc Crehuet has chosen a side problem, a rather isolated case to make his characters collide. He throws them in a labirynth of actions where they must yield their convictions or at least cave in. “The One-Eyed King” touches upon some painfully topical subjects of political responsibility, legalized state violence and the need for political foresight. The genre departs from political satire and turns into a black comedy about the fragility of our convictions, the nature of social roles and the quest for truth.

Petar Denchev is a stage director and writer. He has earned nominations and awards from different poetic competitions, he won the Razvitie award for new Bulgarian novel in 2007. In 2011, he made his debut by staging the play “The Woman from the Past” by contemporary German playwright Roland Schimmelpfennig and since then has made more than ten different performances at the big theatres across the country.

The performance “The One-Eyed King” is carried out with the cooperation of VARNA Wine Cellar.