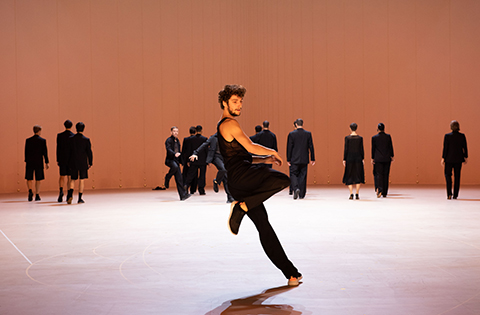 Anne Teresa De Keersmaeker is one of Europe’s most significant and revolutionary European choreographers of the last 40 years. She has explored the relationship between music and dance throughout her career in which Bach has a particular place. During her 1980 stay in New York, in which she first rehearsed her celebrated Violin Phase to the music of Steve Reich, the only other recording playing in Anne Teresa De Keersmaeker’s studio was the Brandenburg Concertos by J.S. Bach. Thirty-five years later, De Keersmaeker continues her work with the piece. “Like no other, Bach’s music carries within itself movement and dance, managing to combine the greatest abstraction with a concrete, physical and, subsequently, even transcendental dimension.”

The “Brandenburg Concertos” consist of six concerti grossi, in which Bach deploys the instruments from the baroque orchestra in different, often audacious constellations. Against this backdrop, De Keersmaeker sets sixteen dancers originating in different Rosas generations. Following the premiere of “Mitten wir im Leben sind/Bach6Cellosuiten” De Keersmaeker approaches, as in “Vortex Temporum” (2013), Bach’s music as if it were a ready-made score for a dance piece, embodying Bach’s polyphonic mastery. The concertos are played live by the baroque ensemble B’Rock conducted by violinist Amandine Beyer.

Production of the year! tanz Zeitschrift 2019

In 1980, after studying dance at Mudra School in Brussels and Tisch School of the Arts in New York, Anne Teresa De Keersmaeker (b. 1960) created Asch, her first choreographic work. Two years later came the premiere of “Fase, Four Movements to the Music of Steve Reich”. De Keersmaeker established the dance company Rosas in Brussels in 1983, while creating the work “Rosas danst Rosas”. Since these breakthrough pieces, her choreography has been grounded in a rigorous and prolific exploration of the relationship between dance and music. She has created with Rosas a wide-ranging body of work engaging the musical structures and scores of several periods, from early music to contemporary and popular idioms. Her choreographic practice also draws formal principles from geometry, numerical patterns, the natural world, and social structures to offer a unique perspective on the body’s articulation in space and time.

Accessible for 72 hours from 28 November 7 pm till 1 December 7 pm only in Bulgaria.