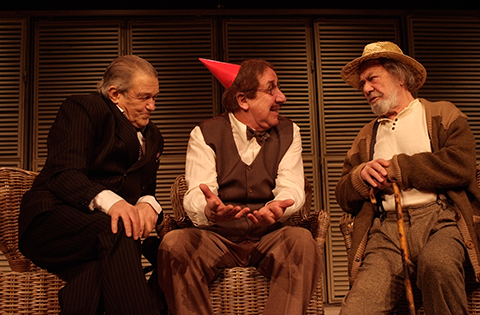 THE WIND IN THE POPLARS

“The Wind In The Poplars” is a comedy by the contemporary French author Gérald Sibleyras telling about the three friends Gustav, Philippe and Henri. They spend their days together joking, quarreling and getting each other angry, but also enjoying each other’s company in a retirement home for World War I veterans. And while they took part in some intriguing adventures in their youth, now their greatest excitement is the celebration of a veteran colleague’s birthday. They pass their time on the terrace arguing and wondering whether the decorative stone dog actually moves or not. And then an idea flashes: to embark on a last adventure escaping to Indochina or maybe just a picnic…

Gérald Sibleyras wrote the play in 2003 and the performance of the same year earned it 4 Molière Award nominations. Director Vladimir Lyutskanov notes that the play was devised especially for adult actors of distinction and full-blooded on-stage presence. So, he paired the performance with a special occasion: the anniversaries of three of the most celebrated Bulgarian theatre and cinema actors. After 50 years on stage, hundreds of roles in theatre and more than 70 films Stefan Mavrodiev is still one of the faces of the Youth Theatre where he has also made his mark as stage director (“Uncle Vanya,” “Yesterday”). Marin Yanev is among the top actors of “Ivan Vazov” National Theatre and Dosyo Dosev is a doyen of “Sofia” Theatre.