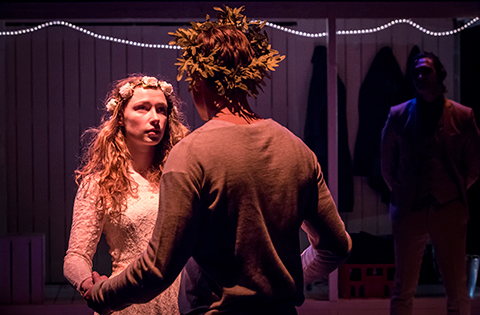 One of Shakespeare’s greatest plays, “The Winter’s Tale”, though written at the same period as “The Tempest”, smashes all the rules that The Tempest follows. Unity of time, place and action are hurled aside as we range across Europe, from court to country, from high tragedy to low comedy, across a time span of sixteen years.

“The Winter’s Tale” tells of a delusional and paranoid king who tears his family apart. But this is the new Shakespeare, after he completed his great tragedies, and the tough struggle for redemption yields flickers of hope. Initial darkness gives way to joy as Time leads the characters to a shattering conclusion…

Cheek by Jowl is the international theatre company of Declan Donnellan and Nick Ormerod. Since it was founded in 1981, the company has been invited to perform in over 400 cities and 50 countries across the world. Prioritising a search for life in the actor’s work, the company has established an international reputation for bringing ‘fresh life to the classics using intense, vivid performances like a laser of light to set the text ablaze’ (The Guardian)

Livestreamed from the Barbican in London on 19 April 2017.

This live capture was made possible by The Space, Arts Council England and the BBC.