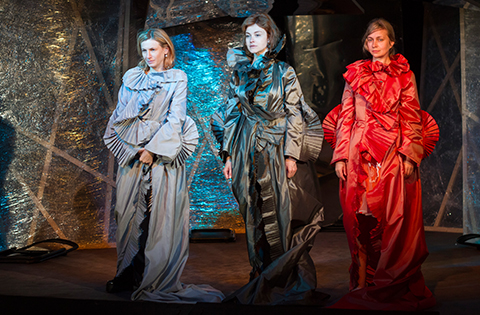 Valeri Petrov wrote “Theatre, My Love!” in 1981 especially for the great actresses Tanya Masalitinova and Slavka Slavova. Mladen Kiselov’s performance at 199 Theatre has gone down in history as one of the most beautiful declarations of love for theatre. Kasiel Noah Asher rediscovers it in a new stage version of the play as an intimate look into the life on stage.

In “Theatre, My Love!” she shares it with the stong tempers of some of today’s most celebrated actresses such as Krasimira Kuzmanova, Lilia Maraviglia and Stefka Yanorova. They have known each other ever since their student days when they entered the world of the theatre in the acting class of Krikor Azaryan. Following the play’s plotline they enrich it by inserting stories and experiences from their own theatre biographies. In “Theatre, My Love!” they appear as four different and captivating embodiments of the Actress.

Kasiel Noah Asher is a stage and film actress working also as a director and producer. She made her first professional roles in some landmark 1990s’ performances directed by some of Bulgaria’s new stage directors such as Ivan Panteleev, Ivan Stanev, Ivan Dobchev and others. Gradually, she shifted to staging her own theatrical projects showing her interest in modern and contemporary literature and dramaturgy.