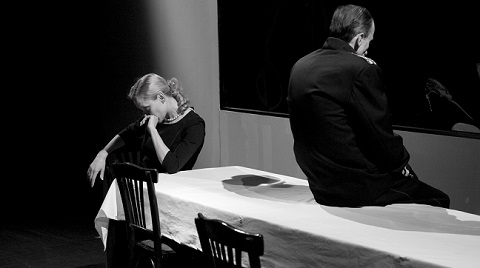 „Three sisters” is among Chekhov’s most staged plays, and according to Krikor Azaryan it is the most hopeless one. The Prozorov sisters’ longing for far away Moscow has become a common metaphor of wasted dreams and strife for better life, world, future. The performance is like a sequel to The Seagull, but this time the talented actors from the troupe of the Youth Theatre get under the skin of the Chekhovian characters. The dull feeling of the irreversible passing of time is more acute and painful, and the focus is more emphasized on the different ways in which the characters question the meaning of life.

It might be true, as some say, that I have ventured to stage the ingenious text “Three Sisters” very, very late… This play’s perfection is very demanding to the director for lots of reasons. He is intimidated by the volumes of books, written by the brightest minds, who have meditated on this drama. He is respected by the great directors who have put the play on stage before, by the great actors who have played in them. In my narrow field as a theatre director I have always insisted on having two… or actually three things. Here they are: Just now I feel the real need for this play, because I want to express the thoughts and feelings inside it as if they were my own. Second is to have a good troupe. It is very important to meet the exact actors who may embody the life of the play.
And third: the creative atmosphere, the spirit. I found these here in the Youth Theatre.
Krikor Azaryan