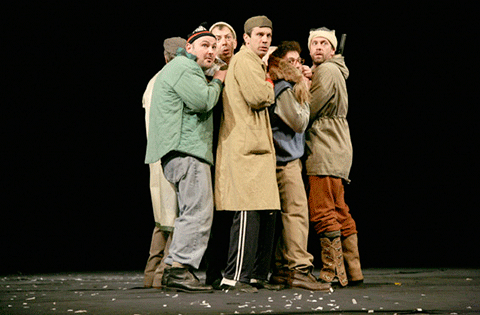 “Sumatoha” (or “Turmoil”) is one of the liveliest and unforgettable plays by Yordan Radichkov – the wizard of words. Original, eccentric, funny, local and universal at the same time. The characters represent different mentalities and their absurd dialogues and actions touch deeper problems of existence. The modern staging of director Boian Ivanov looks at the text through the glass of one of the biggest themes of current time – the opposition between centre and periphery. The director plays with our obtrusive feeling about the fact we belong to the outskirts of civilized Europe. On an almost empty stage the remarkable team of actors plunge into the turmoil with ease, sense of humor and good feeling for the grotesque, keeping the spirit of the classic play, while at the same time remaining adequate to contemporary sensitivity.