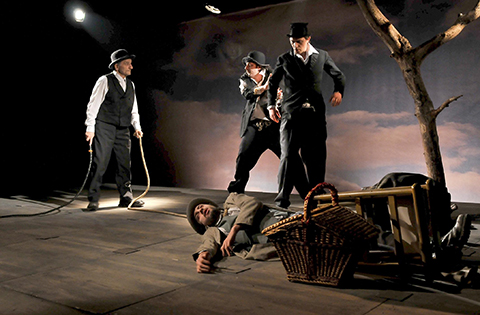 Lilia Abadjieva is best known for her spectacular performances in which important classical texts (Hamlet, Othello, The Inspector General, The Seagull) were deconstructed and presented with stylized theatricality and postmodern irony. In Waiting for Godot she shows somehow a different approach to the text by choosing to follow faithfully Beckett’s words.

The programmatic piece of work for the theatre of Absurd strikes a very deep and firm chord in this performance. The director strictly follows Beckett’s text and emphasizes the existential situation of the characters and the depth of their disappointment and despair. The staging stands out with high actors’ achievements. Tsvetan Alexiev as Vladimir originally and in detail elaborates his character in the manner of tragic grotesque. Stefan Denoluibov plays a flexible and clownish Estragon. In Lilia Abadzhieva’s performance Waiting for Godot sounds as if heard as for the first time.

“Waiting for Godot” is more existentialist text than absurd. I belong to the generation of the grown up girls and boys, who lost their illusions. That may sound pathetic but its true. We have reached our dreams long ago. And we have reached the following despair as well, the one that comes after the feeling that the way cannot be passed without a new utopia.
Lilia Abadjieva