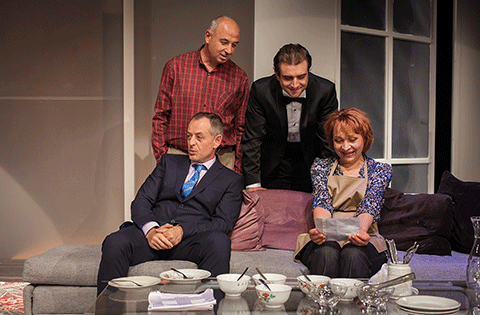 WHAT’S IN A NAME?

Nothing suggests that the dinner at the Garrauds would take such stormy turn. Élisabeth is playing Moroccan cooking, and Pierre is so busy looking for the keys for the basement that he gets his childhood friends Claude and Vincent involved in the game of “find what’s lost and have my eternal gratitude”. Vincent’s wife is late, as usual and while waiting for the arrival of the pregnant Anna they start another game: “guess the child’s name”. When Vincent reveals the name he will give his son it causes a commotion. A heated argument ensues and delicate topics, hidden secrets, insults and painfully well-known prejudices come to light…

Before they started working in tandem Matthieu Delaporte wrote sketches for the talk show “Le Vrai Journal” of “Canal +”, and Alexandre de La Patellière was assistant director of commercials and feature movies. Their first co-written scripts for cartoons earned them the reputation of a good team. But it was the play “Le Prénom” that made them a trademark of contemporary high comedy. It was nominated for the prestigious Molière Award in France and the film of the same name in 2012 made it a hit.