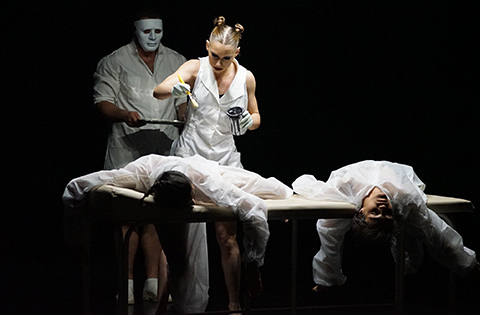 The dance performance “Zen Play” undertakes a play with the established realities. The stage becomes a kind of laboratory for experimenting with bodies, characters and roles ascribed to them. However, things gradually run out of hand… The illusion of reality is fully real. The man is not a man, the woman is not a woman. The performance has the dynamic dance signature of the choreographer Zhivko Zhelyazkov and the vigorous presence of the dancers in a dark and grotesque theatrical style with captivating electronic music sound environment.

Derida Dance Center was founded by choreographer Zhivko Zhelyazkov and manager Atanas Maev in 2009 in Sofia and has won recognition as a sustainable structure for training, producing and promoting contemporary dance. Zhivko Zhelyazkov graduated in Acting from the National Academy for Theatre and Film Art and specialized dance theatre directing and contemporary choreography in Melbourne, Australia. He is the choreographer and director of a number of dance performances, such as “ARTeFACT”, “Monocrossing” and “Silent Weapon” nominated for Union of Bulgarian Actors’ 2016 IKAR award for best contemporary dance and performance.

The project is carried out with the support of Sofia Municipality.