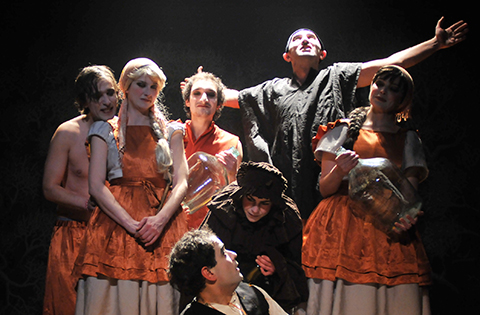 The theatre directors and pedagogues Margarita Mladenova and Ivan Dobchev founded Theatre Laboratory “Sfumato” in 1989 as a territory for theatre researches. They have established themselves as one of the aesthetically leading teams and have won numerous national and international awards and recognition. Their work proceeds in the form of artistic programmes („Archetypes’, “Мyths”) or on the works of particular authors, mainly key representatives of the European Мodernism – Dostoyevsky, Chekhov, Strindberg etc. Each staging is prepared within acting ateliers and happens as an explorative penetration into the poetics of a certain theme or author.
So „ОООО Gogol’s Dream” is not only a performance on the occasion of the 200th anniversary of his birth, but the next expedition that Theatre Laboratory “Sfumato” initiates into the world of an author. Stories and motives of four works by the classic Russian writer are gathered together: “Nevsky Prospekt”, “Ivan Fyodorovich Sponka and his Aunt” and “Diary of a Madman”, as well as the comedy masterpiece – “Marriage” and the title is drawn on one of his pen-names. They are connected like fragments of a common dream, populated by the fantastic characters of Gogol in their histrionic and eccentric existence. The performance creates a wondrous world between the fantastic and the grotesque full of expressive acting, visual and musical suggestions.

“Gogol releases our intuitions for paradox, phantasmagoric insights, more real than the world of logic.”
Margarita Mladenova and Ivan Dobchev