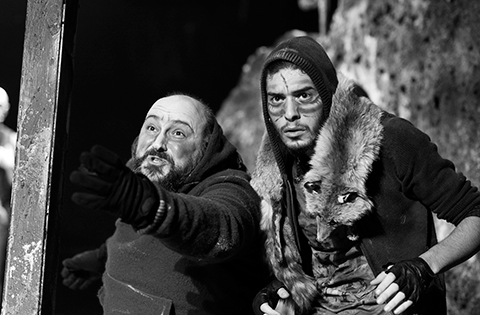 “New Bible” is the second performance of the Sfumato Theatre Laboratory’s Noah’s Ark Programme dedicated to the works of Yordan Radichkov. Each of the productions is marked by the distinguished style of its director. They are united by the question of the dynamics between the local and the global and ask how to be open to the Other without losing your own identity.

“New Bible” is, in fact, the initial title of Yordan Radichkov’s first play “Bustle” which marked his encounter with theatre. The play is also the basis for Ivan Dobechev’s performance supplemented by passages from other texts of the writer and improvisation on topics related to the new Bulgaria history. An absurdist theatrical “bustle” of parables, odd stories and happenings thus comes into being where the characters exist between “here” and “beyond,” between fiction and reality. Ivan Dobchev cooperated with artist Stanislav Pamukchiev to create the intriguing and highly symbolic imagery of the performance.