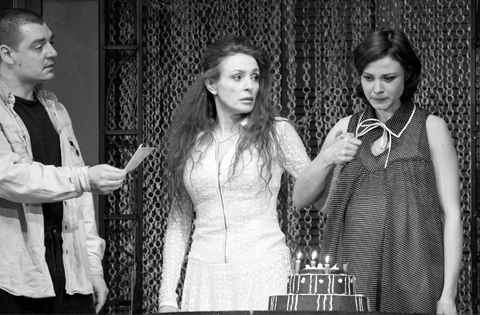 The play “A Streetcar named Desire” by Tennessee Williams became a theatre hit in 1946 and brought Williams “Pulitzer” and world fame after its film version directed by Elia Kazan with Marlon Brando and Vivian Leigh starring. The play belongs to the American realism after World War II. Williams enriches it with a fine sense of metaphor and deep psychological approach. In most of his works he explores social problems through the idea of the basic role of violence and sexuality. After the beginning of the 90’s, this is the second time that Krikor Azaryan stages “A Streetcar named Desire”. This analytical and detailed interpretation goes beyond the popular images of Stanley Kowalski’s machism and Blanche DuBois’ fastidiousness.

This time I wanted to trace the story of the bursting of this weird woman into the life of ordinary people, that leads at the end to the question who is crazy and who is normal. I was preoccupied with the thought why the whole time everybody accepts Blanche’s lies and the only time, she speaks the truth, they call her crazy.”
Krikor Azaryan, director

… provocative text, high level acting and directing that explore crises states of mind and soul. This performance will not leave any of its spectators indifferent.
Bogdana Kosturkova, “Demokracia” newspaper