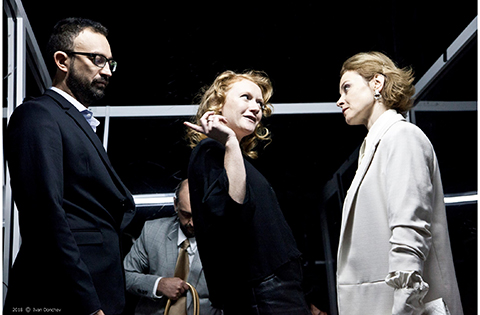 This is the third time director Anton Ugrinov stages a text by the successful French playwright Yasmina Reza, attracted by the exquisite denunciation of the play of social masks in it. This is what “bella figura” means: “a beautiful figure.” A carpark in front of an upscale restaurant. He, Boris, and She, Andrea, are on yet another of their adulterous dates. He slips a sentence involving his wife into the conversation, thus unfolding the plot of “Bella Figura.” A car accident followed by a chance encounter with Boris’s family friends Françoise and Eric lead the characters through a number of twists and turns mixed with a sophisticated dialogue and an ironic hidden meaning of what the words. Yasmina Reza’s humor leaves one with the odd impression of inner anxiety, unasked questions and unsolicited answers to life, friendship, family and love.

Yasmina Reza wrote the play especially for the Berlin theatre Schaubühne and director Thomas Ostermeier in 2015, and in 2017 she staged it herself at Théâtre du Rond-Point in Paris. Her plays
have been translated into more than thirty-five languages and have earned the prestigious Lawrence Olivier and Tony awards.