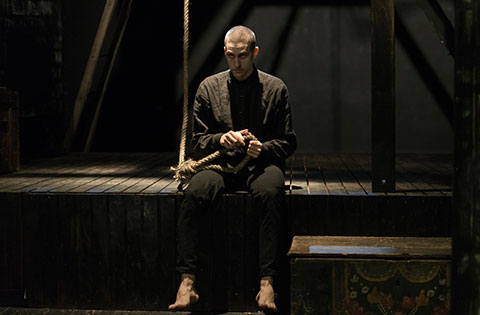 After the novel “Demons” by F. Dostoevsky

Adapted and directed by Ivan Dobchev

Theatre Laboratory “Sfumato” was founded in 1989 by directors Margarita Mladenova and Ivan Dobchev. For more than 20 years of existence it has managed to establish its unique style and manner of working and achieve international recognition. The laboratory asserts itself as a territory for theatrical quests and develops thematic programmes exploring the world of authors important for European culture.

After “The Valley of the Shadow of Death” the first programme based on Dostoyevsky in 2002 featuring the performances “Alyosha” and “Ivan” Theatre Laboratory “Sfumato” again enters Dostoyevsky’s ideas to pose the question of the high values in contemporary world in their new programme based on the great Russian author: “Expelling the Demons”.

Dostoyevsky’s “Demons” has been called the “beheaded novel” because ultimately the chapter “At Tikhon’s” did not make it into the published version. However, it is precisely the core of the performance of Ivan Dobhev, who takes on stage the confession and penance of the main character Stavrogin. That’s also the role assumed by all others – from admirers to victims – who pass the road from “killing God” (as the girl herself puts it) to re-discovering Him again, “through the abyss, to the stars”. A powerful performance of grotesque imagery and shaking dramatic effect.