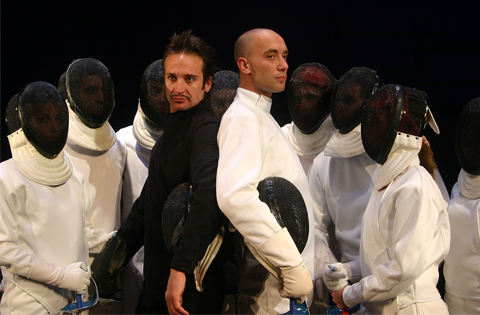 Alexander Morfov is among the directors who during the 90s have changed the face of Bulgarian theatre with his performances based on classic texts turned into authorized postmodern collages. His creative director’s style staking on improvisation, his original and up-to-date sight of the classics, as well as his flair for the visual and the spectacular bring him extraordinary popularity inside and outside Bulgaria. Almost all of his performances have been chosen for the official selection of ITF “Varna Summer”. His productions have been shown in Morocco, Ukraine, Poland, Austria, Russia, Spain, Italy, Germany, Holland. He has been staging in Paris, Moscow, Saint-Petersburg, Skopje and Stockholm.

In the last few years Alexander Morfov works mainly in Russia. There he stages his first version of Moliere’s “Don Juan” (2004, “Vera F. Komissarzhevska” Theatre – Peterburg), which was nominated for the “Golden Mask” award.

With some of the best actors of the National Theatre, Morfov puts on the stage a different version of “Don Juan”, which marks a new direction in his work towards a much more purified and focused style. The director reworks Moliere’s text and attaches to it excerpts from Mozart’s opera of the same name, light motifs from Tirso de Molina’s play, paraphrased anecdotes and others. The scenic narrative combines the epic of the cinema with the musical expressiveness of the opera. Passing from genre to genre, from irony to parody to existential tragism, Morfov conveys all contradictions, dilemmas and demons of contemporary man in the doubled image of Don Juan – Sganarel.

Moliere’s “Don Juan” is the most interesting, most philosophical, most pure… For this play is interesting not just because of the lover, the famous seducer, the dream of every woman, the adventurer. All that is just a prelude, a decoration, a topping on a much more interesting and deeper content. It is about a man who is the embodiment of freedom. A man who has no dependencies – family, religious, social… And the question here is the same we faced ten years ago – when a man is free, what does he do with his freedom.
Alexander Morfov