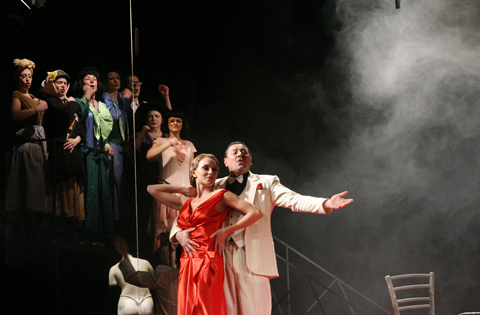 “Dr.” (1936), written by the Serbian writer and playwright Branislav Nushich, bears the typical elements of a Balkan comedy – paradoxical and absurd situation and selfirony towards national stereotypes. The maid’s son becomes a PhD in Philosophy, under the name of his master’s son, who is tempted only by pleasures and nightlife. Endless intrigues, entangled and absurd situations and mixed identities, follow one after another in a family where nothing is as it seems to be and everybody presents himself to be someone else.

The director Boiko Bogdanov is acknowledged as one of the most original figures in contemporary Bulgarian theatre, most of all thanks to the performances with his experimental theatre studio “Elizabetha Bam”. His artistic biography includes more than 70 stagings, several operas and original music for theatre and cinema. Since 1998 he has been manager of NDT “Salza I smiah”.

The performance juxtaposes two value systems – the one of the civilized world, where life is real, and the other one – of the Balkan reality where life is often brought to every day existence.
Boiko Bogdanov for “24 hours” newspaper

Boiko Bogdanov’s performance is an outright, sometimes abrupt comedy… Here you can find a lot from everything – laughter and grotesque, craziness and truth, Balkan morals and people, deceits and revelations and actors you would not forget.
“Duma” Newspaper