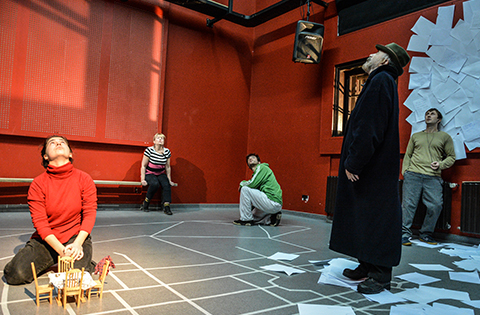 They have been left with no home. What has become of their life? A look at people who turned out in the gutter for different reasons. Peering into them, into their days and nights. “Home” is the third documentary theater project on social topics from the series “Invisible” of Vox Populi Studio that aims to arouse empathy for people in the margins of public life. Vox Populi Studio is an original formation that has established the genre of the so-called “verbatim” theatre in Bulgaria. “Verbatim” (Latin for “word for word”) performances are based on documentary interviews and their reproduction on stage. “Home” tells the stories of several people who have been left homeless with whom the team met: stories of inexplicable twists and turns of life and the power to overcome them. In “Literaturen Vestnik Weekly”s New Year’s inquiry, Bulgarian theatre critics almost unanimously declared Vox Populi Studio’s performances the theatre event of 2013.