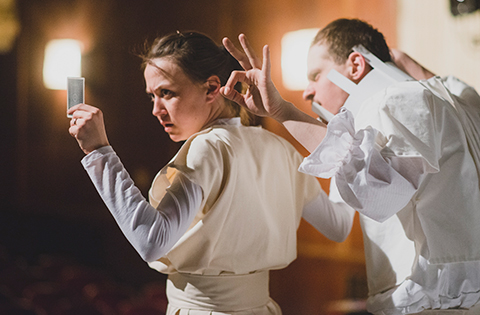 The story pictures Joan of Arc as a girl born in Eastern France, who convinced everyone that she was guided by God and who led the French army in battles in the Hundred Years’ War in the 16th century. She was captured, put on ecclesiastical trial on charges of heresy and burnt at the stake at the age of 19. Subsequently, she was pronounced innocent, made a martyr and canonized as a patron saint of France. Ever since the name of Joan of Arc has been the subject of legends, medieval mysticism and various interpretations. Director Petrinel Gochev has gathered a young and strong creative team so that they can discover together the force of attraction of Joan of Arc’s character today. A performance about the encounter of two worlds: the world of a girl and the world of the limits and the right of the strong. Today Joan of Arc is a saint but what does that mean? Do we want that choice for ourselves? Can we resist such a command, are sanctity and devotion to a cause necessary to anyone?